Elect PAUL MORROW, Ed.D. to the HBCSD Board of Trustees 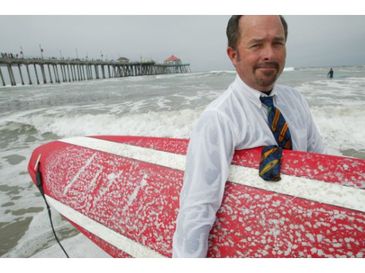 What better experience could one ask for in a Principal than to have one who has been both a teacher and administrator at the elementary, middle and high school levels.  It has been my distinct pleasure to do just that!  that!  I began my career in the Centralia School District, working in both regular and special education.  From there, I moved onto the Charter Oak Union High School District where I worked as a Resource Specialist Teacher in both the middle and high school levels, as well as coached both Tennis and Wrestling.  In that district I became a principal of Glen Oak Elementary School as well as Washington Elementary School, the districts "School of the Future".    My career continued to expand with my move to the Huntington Beach City School District where I served as the Principal of Moffett Elementary School for four years.  I was next  asked to take on the assignment of Middle School Principal at Isaac Sowers Middle School where I remained for 15 years.  During that time, Sowers Middle School not only was awarded the title of California Distinguished School but also earned the prestigious National Blue Ribbon School Award of Excellence!  My career goals were by no means over as I then  set my eyes on a principalship at the high school level.  I was next,  employed by the Huntington Beach Union High School District as Principal of Marina High School where I have served for nine years.  While serving at Marina, better known as the Viking Nation, Marina High School   earned the title of California Distinguished School was listed in Newsweek's Top Schools in the Nation and had a number of teachers and programs received outstanding recognition through the Orange County Office of Education and organizations such as the California League of High Schools, Sunset League and CIF.   Currently I serve on the Board of Trustees for the Huntington Beach City School District, serve as Area Director for Young Life (a christian ministry her in Surf City),  volunteer as a Chair for the Western Association of Schools and Colleges (WASC) where I review schools for accreditation as far away as South Africa and Hawaii.

In my last principalship, Marina High School, we took great pride in being a school focused on preparing our students for success in college and careers post high school.  With  impressive Advanced Placement Programs,   extremely strong Mathematics, Science, Social Studies, World Language and English programs, yearly drama and musical programs ,  a rich elective program, including an award winning band and choir,  Marina brands itself as “The School that has it All”.   Marina High School is a school where everyone feels known and cared for.  Its professional and highly competent staff believe their students are the future and it is their responsibility to help them achieve success in both their personal and professional lives.

In my spare time, I enjoy surfing, where I have been recognized in the International Hall of Surfing Fame - Honor Roll. I also served as  the Director of the National Scholastic Surfing Association Jr. competitive surfing series for 27 years.  I enjoy trekking up mountains in unique and far off places, such as Mt. Everest, Mt. Kilimanjaro, and just recently Mt. Salkantay in Peru, where I was also able to visit Machu Picchu.  I also enjoy flying airplanes, scuba diving, sailing and I am  active participant in my church, Rock Harbor, Costa Mesa where I serve as a Community Pastor, Lead Usher and Leader in the Kingodom Culture program.   I have been on a number of mission trips to Uganda and Israel and now currently support an amazing family in Gulu Uganda.